Judge Alexander Blue's House
& Greenmead Office
This two-story Italianate farmhouse is over one hundred and thirty years old, according to City records.  This house was originally located on the west side of Middle Belt north of Schoolcraft and was moved to Greenmead in 1987.

Alexander Blue held many township positions during his lifetime. He was elected Justice of the Peace in 1846 and held this position for 28 consecutive years. He also served as township supervisor for three years, beginning in 1864, and as postmaster of Elm in 1881. 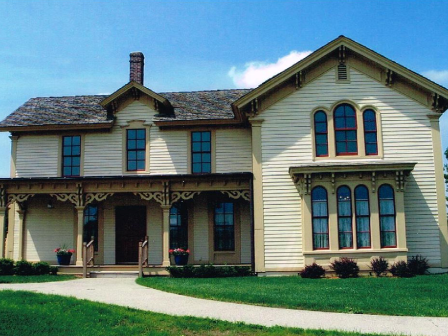 Historic Newburg Church
The Newburg Methodist Church was constructed in 1848 on a site across from the Newburg Cemetery. The Sunday School wing was added in 1889.  The pews and stained glass windows in the church today were installed in 1902.

In 1915 the church was moved from its original site to the northeast corner of Newburgh Road and Ann Arbor Train in an effort to increase the congregation’s size. The front vestibule was enlarged, and the bell tower was rebuilt in 1948.

The City of Livonia acquired the building in 1977 and it was restored to its 1915 condition. 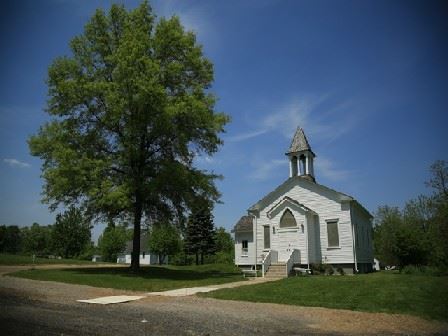 Parsonage
The Newburg Methodist Church was removed from the Plymouth Circuit in 1920, creating a need for a parsonage.  Ground was broken north of the church on Newburg Road for the Parsonage on April 1, 1924.  On June 28, 1924, the Rev. Paul Havens moved into this new seven room Bungalow.  By the time the house was dedicated, this small congregation with the help of other area churches had paid half of the $4,300 cost of the building.

In 1960, the Newburg Methodist Church built a new parsonage on Ann Arbor Trail.  The old Parsonage was donated to the city by the Lord’s House, and was moved to the Historical Village on July 1, 1977, where it is now part of the recreation of the Newburg intersection.

The Parsonage is not open to the public. 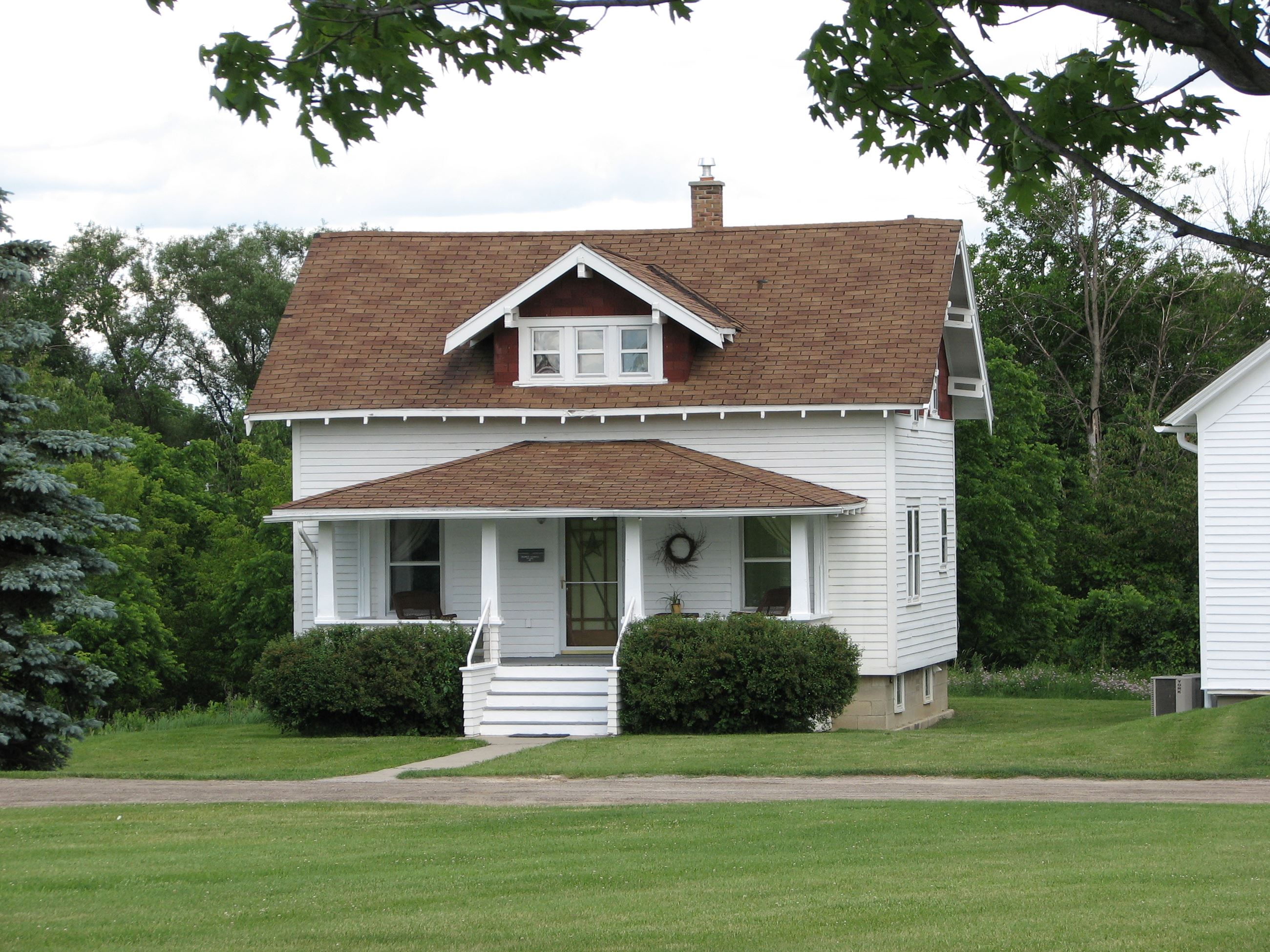 Newburg School
The original Newburg School was a small log structure built in 1831. In 1861, the log building was replaced with a new one room frame school building built for $400.  The interior consisted of one classroom and two cloakrooms.

The frame building was used until 1922, when it was replaced with a four room brick school.

Newburg School was donated to the city and moved to Livonia Historical Village at Greenmead in March of 1987.

School children from our area schools can have a One Room School day experience.  Teachers may contact the office at 248-477-7375. 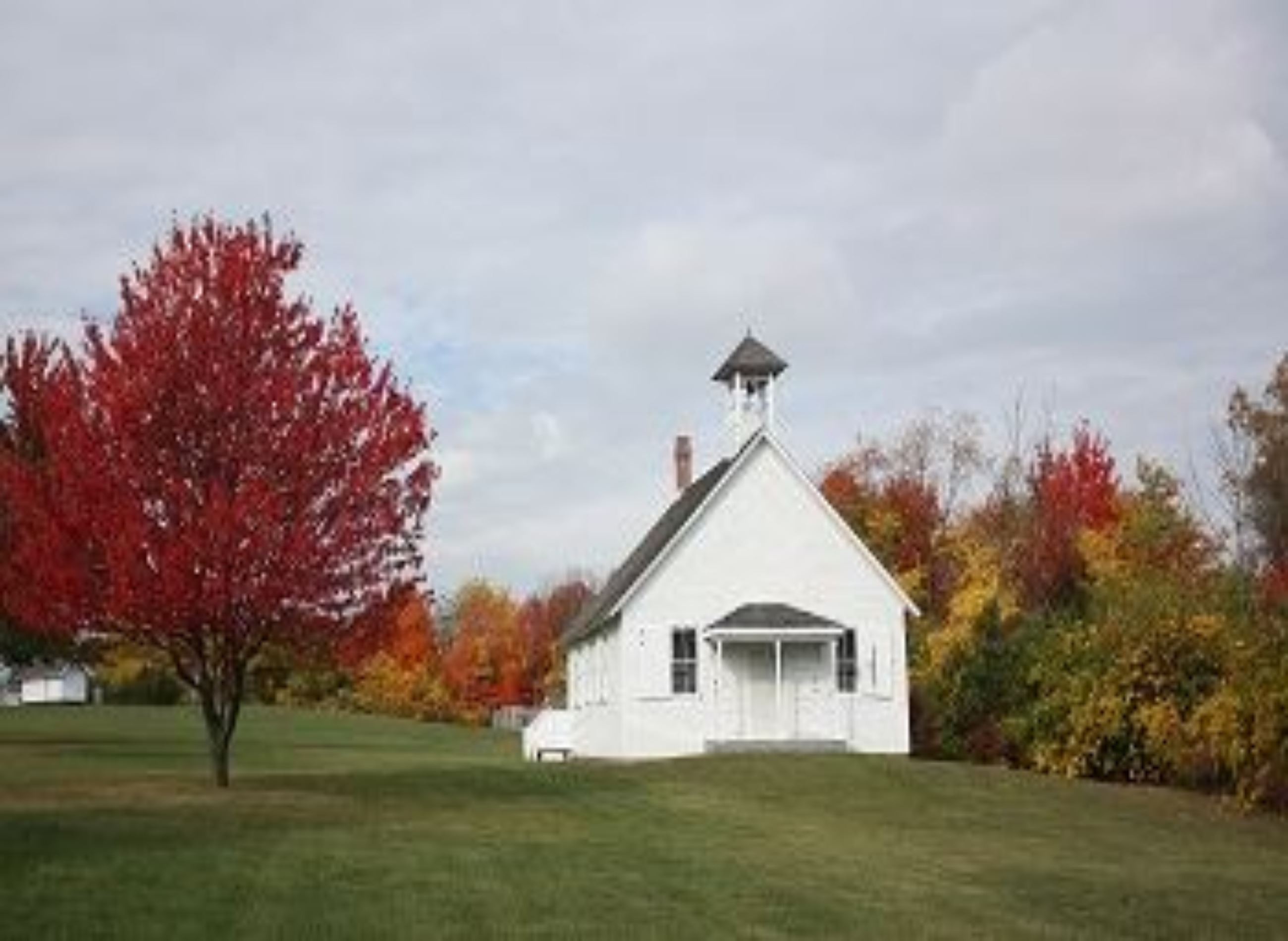 Bungalow
According to city records this bungalow was built in 1913. The first floor originally had two rooms, which were a living room and a kitchen.  The second floor had two bedrooms.

The Geer family lived here for a short time while operating the store next door.

The clapboard residence was originally located on the south west corner of Ann Arbor Trail at Newburg.

It was donated to the city of Livonia for the Historical Village by Forest and Gargaro in 1979 and was moved to Greenmead that year. 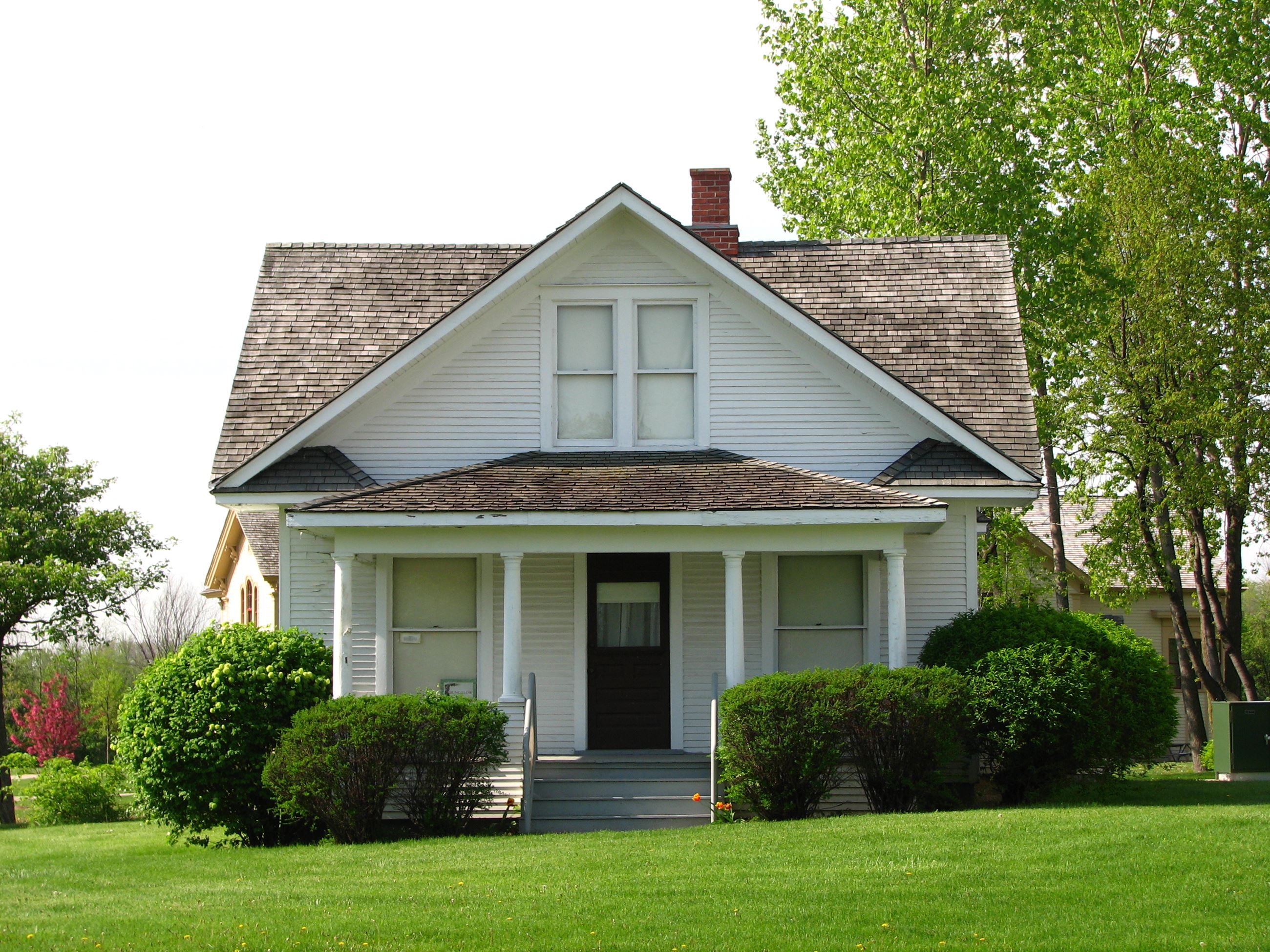 A.J. Geer Store
The A.J. Geer Store was opened on December 21, 1912 and sold groceries, dry goods, and hardware. It was operated by Allen J. Geer and later by Mr. Carson. During the time Allen owned the store, him and his family lived next door in the Bungalow.

The building was located west of Newburg Road on Ann Arbor Trail. The store is stocked with similar items listed in the store ledger for the year 1913.  This building was moved to Greenmead in 1976.

Stop in during our tour Sundays to purchase 'penny' candy, small toys for the kids, and a variety of Greenmead merchandise. 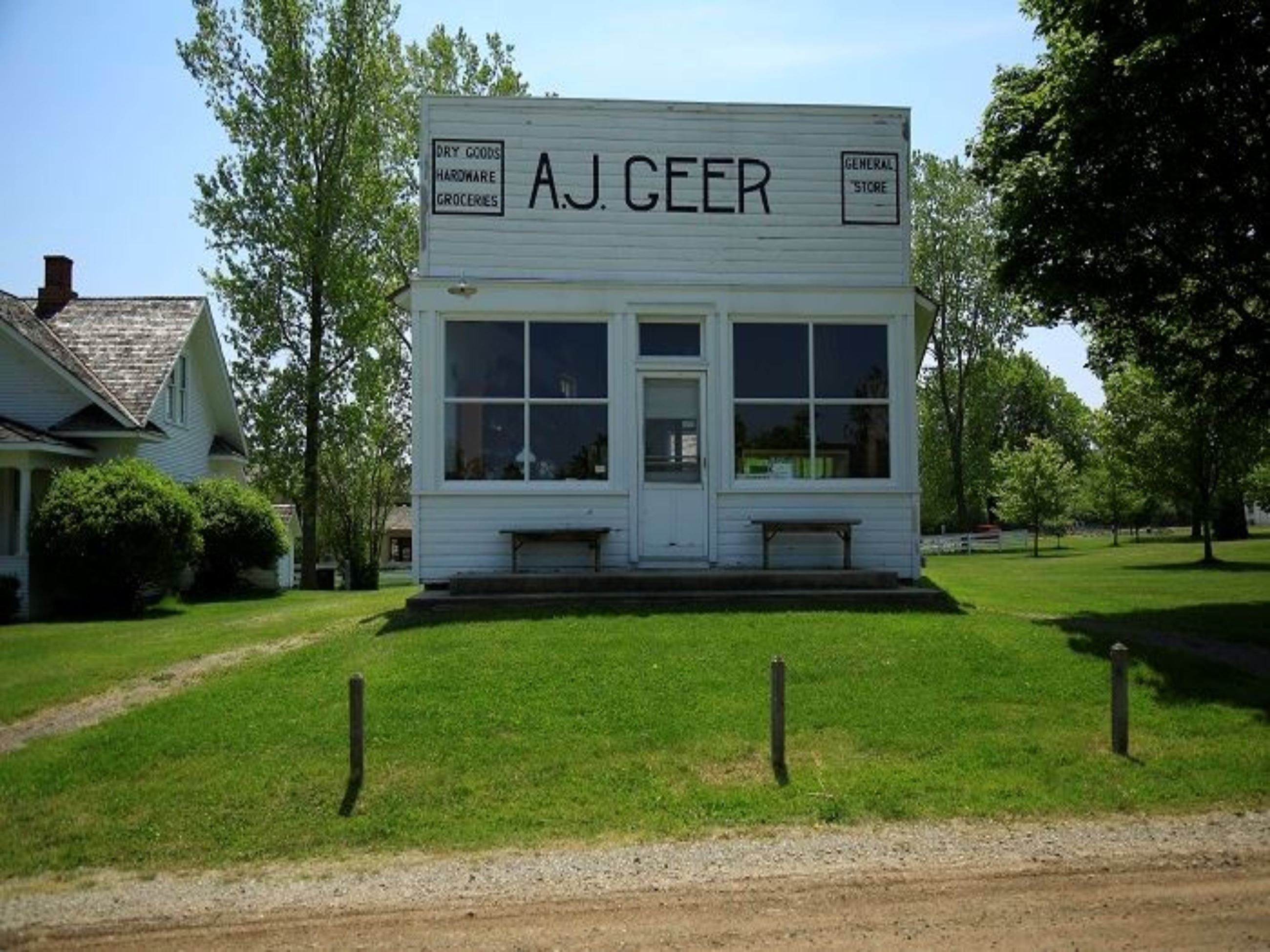 The line ran between Wayne and Northville, making stops at Newburg and Plymouth. The track turned at the corner of Ann Arbor Trail and Newburg until 1912, when it was moved.  It then curved behind the A.J. Geer Store.The Plymouth, Northville Railway was purchased by the Detroit United Railway in 1907.  It operated the line until 1927.

The Detroit United Railway Waiting Room is divided into two rooms; a small waiting room with benches and a larger freight room. 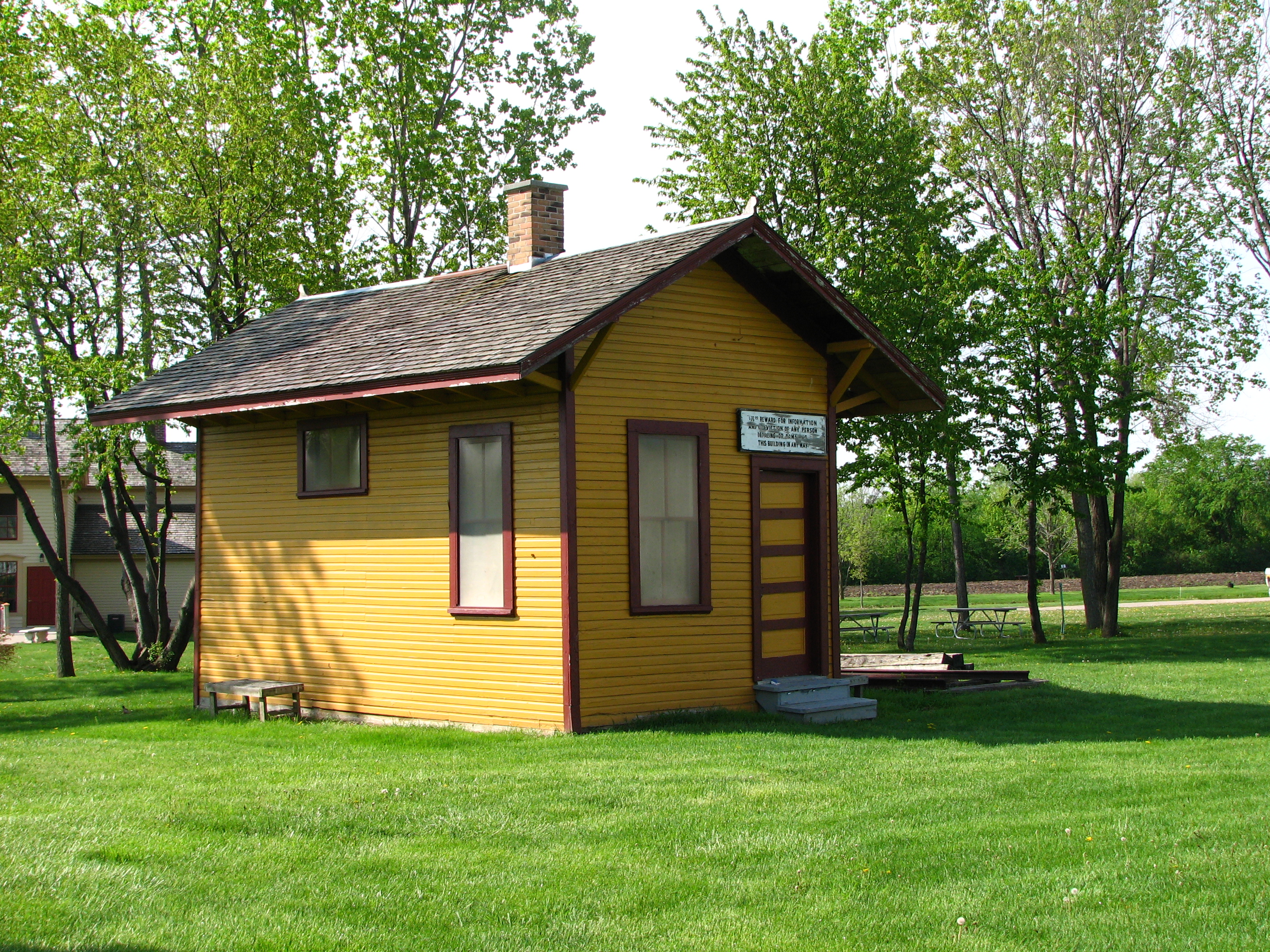 In 1827, Daniel and David Lapham purchased property near the intersection of Farmington and Seven Mile Roads and a portion was set aside for a meeting house and burial grounds for the Friends. The Livonia Meeting first erected a log-frame building in 1838. It is unknown what happened to this structure. In 1846, the current building was erected on this same site and served as the meeting house for a very short time with the last meeting held in 1853.

The property was purchased by the city of Livonia in 1962. The building served as the city historical museum from 1975 to 1977. 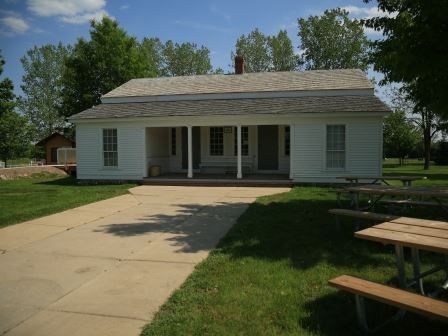 Shaw House
Thomas Shaw built this eight-room Greek Revival house in 1843. This house was the first frame house constructed in Livonia. The entrance of the house features side lights and Ionic order fluted pilasters with dentils over the door. An unusual feature of this building is the staircase. This steep winding staircase, with 12 steps, is 57 inches wide and only 53 inches deep.

In 1981, the building was moved to Greenmead by the Livonia Historical Society and opened to the public in 1983. 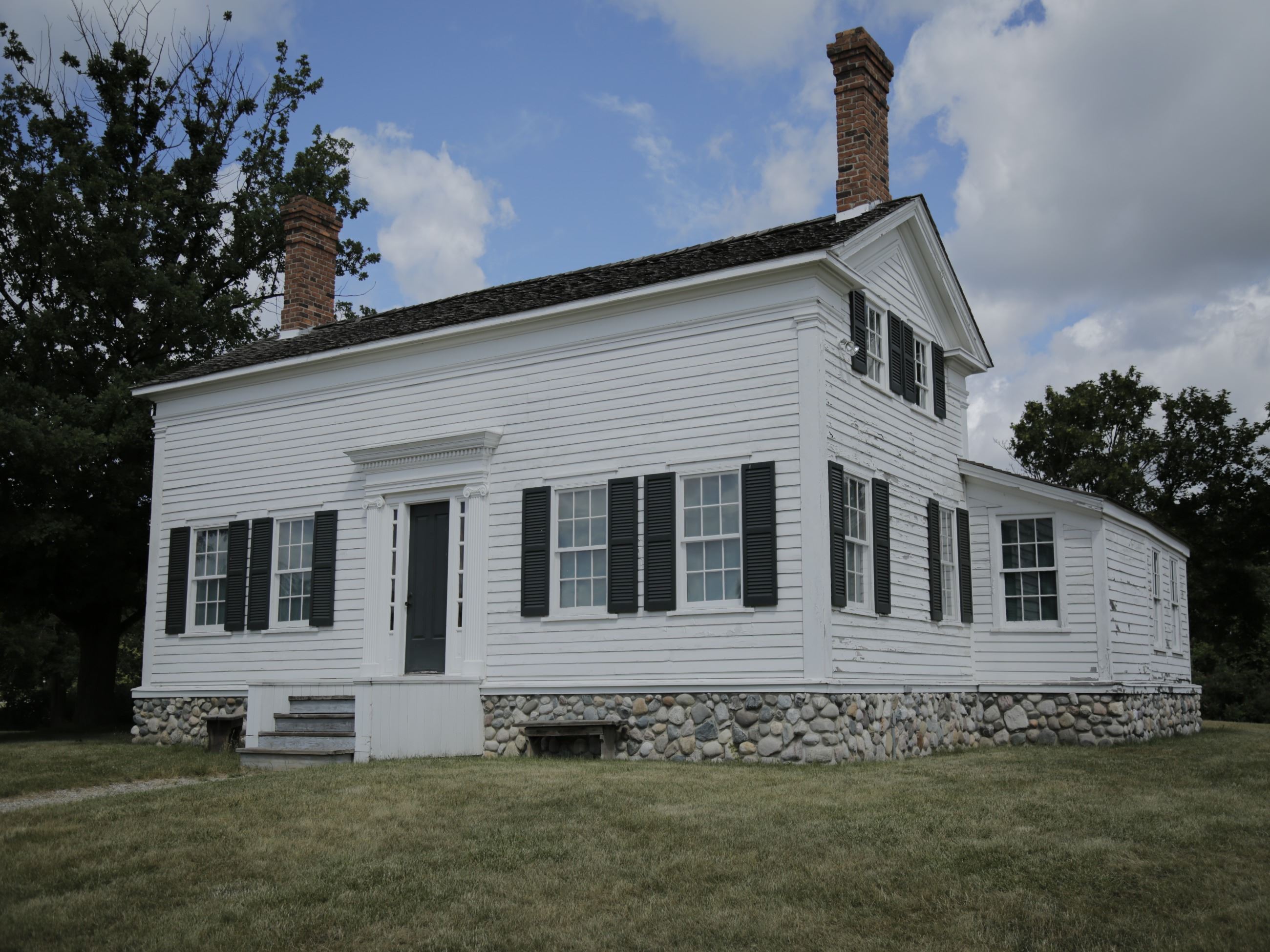 Kingsley House
In 1843, Nathan Kingsley built a home on his farm in the small settlement known as Livonia Center. Today that location is on the west side of Farmington Road just north of 5 Mile Road. The 80-acre farmland became the south half of today's Coventry Gardens Subdivision. This home is an outstanding example of midwestern Greek Revival architecture. The wood used in the home was hewn from trees on the property.

The home was owned by the Kingsley family until 1917. In 1977, Mrs. Allen donated the house to the City of Livonia, and after it was moved to Greenmead, restored to its 1843-1850 appearance. 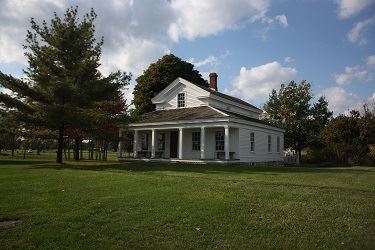 The Newburg Intersection
The Newburg intersection from 1910-1935 is recreated at Greenmead with six original buildings from the early days of Livonia. The Newburg Church and Parsonage, Newburg School, Bungalow, A.J. Geer Store, and Detroit United Railway Waiting Room were moved to Greenmead and placed in their original orientations to the compass and to each other to depict the hamlet of Newburg at this time.  The two dirt roads between the buildings represent Newburg (north-south) and Ann Arbor Trail (east-west).

Simmons-Hill House
"Greenmead” is the official name for the historic buildings and land on the southwest corner of Eight Mile and Newburgh Roads.  The original owner of this property was Joshua Simmons III, one of Livonia’s earliest settlers. The Greek Revival farmhouse was built in 1841.

In 1920, the farm was sold to Sherwin and Jean Boyd Hill. The 80-year old house needed significant restoration which took over a year to complete. The changes they made included taking a vehicle storage area and turning it into the sunroom, enlarging and updating the kitchen, moving the staircase to expand the front parlor, and adding gardens.

The house and outbuildings were placed on the National Register of Historic Places in 1971. 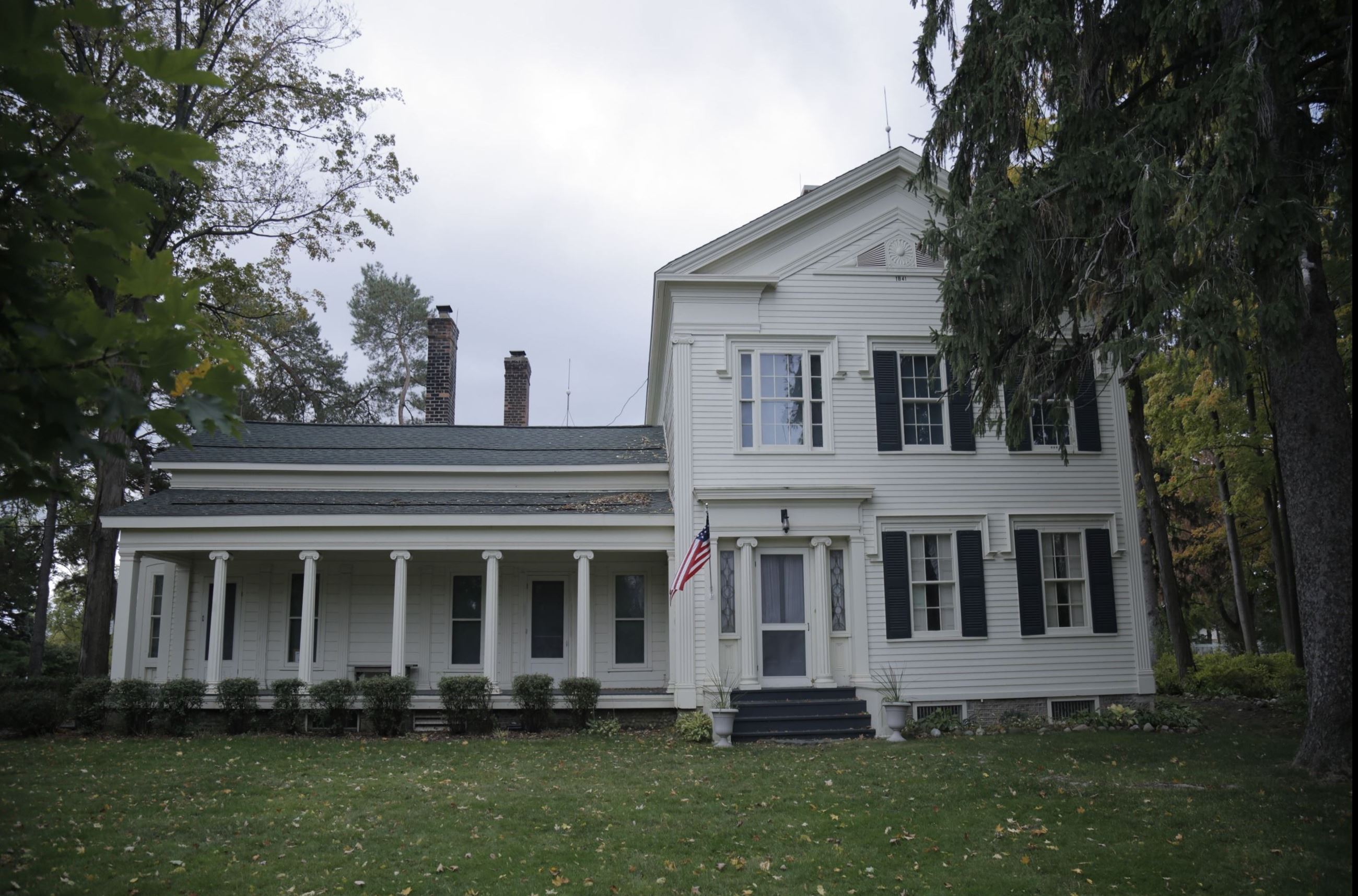 Carriage House and Greenhouse
The greenhouse was added by the Hills in 1926, enabling fresh flowers to be available for Mrs. Hill daily.  The gardener lived in the quarters above the garage area and tended the greenhouse boiler.

The greenhouse was restored summer/fall of 2019. 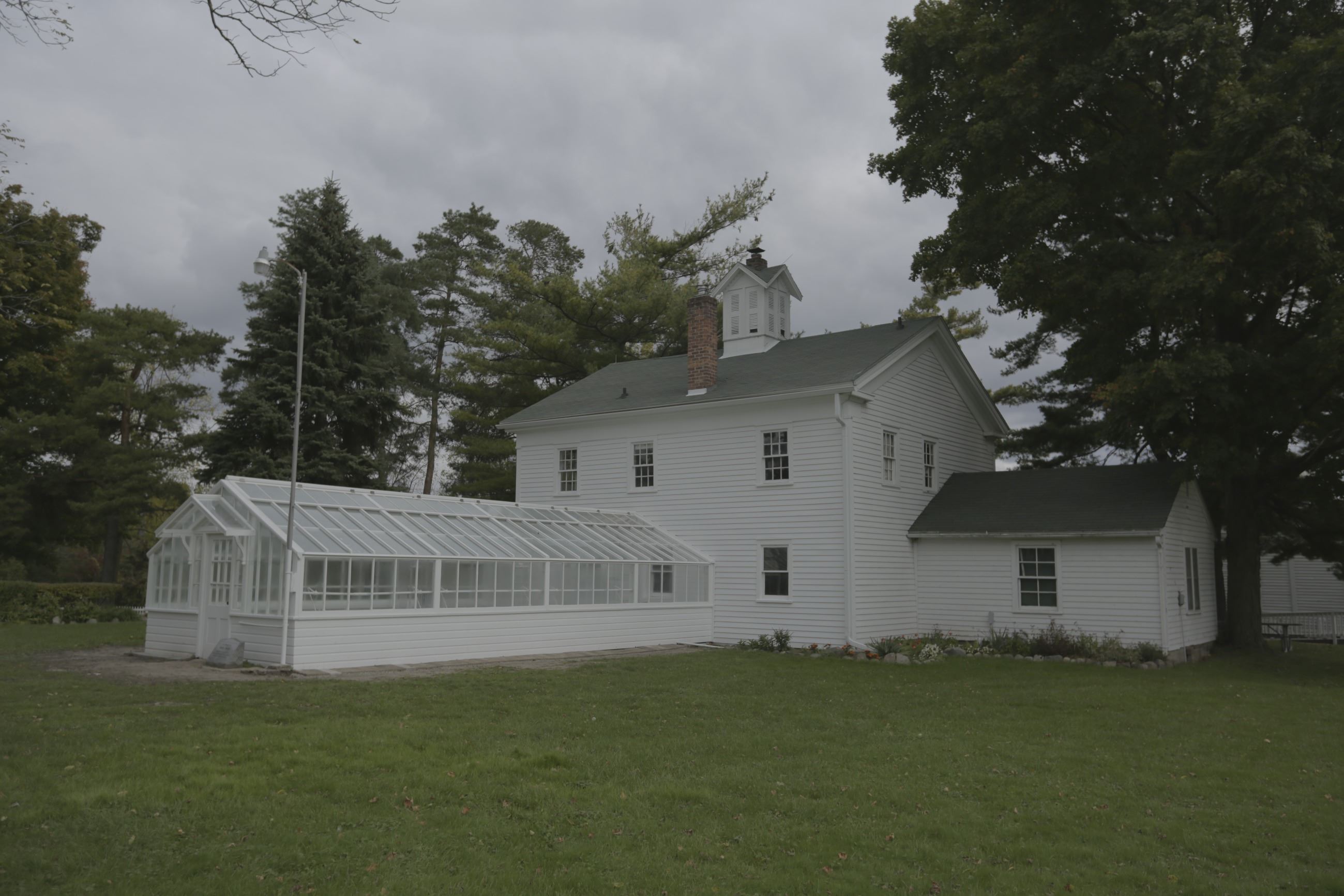 Farmhand's House
Close examination of the structure of this house indicates it is very old and probably is the second house the Simmons family lived in on the property, prior to the construction of the Greek Revival house. If so, it may be the oldest frame residence in Livonia. 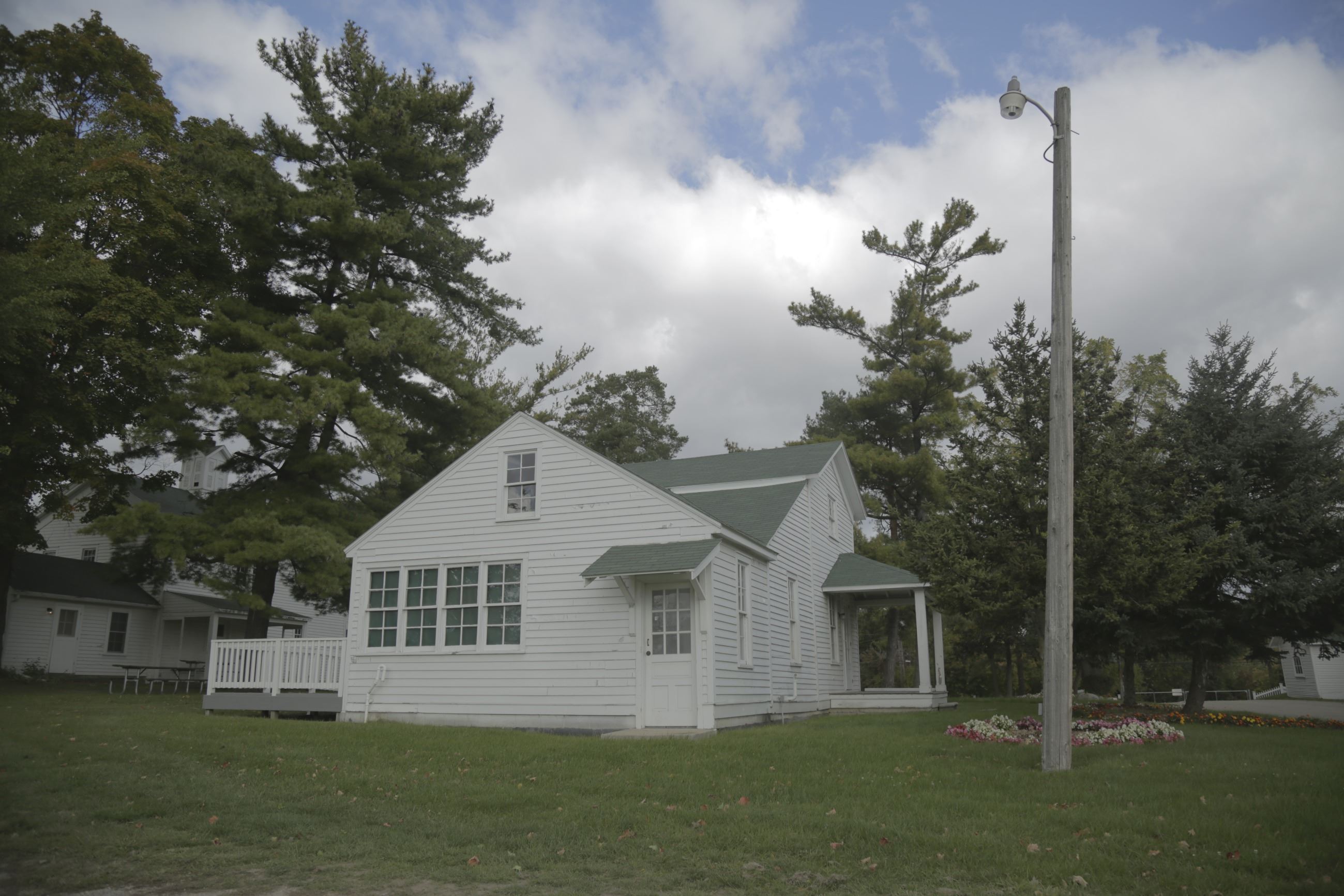 North Barn
Joshua Simmons built the first frame barn on his property in 1829, while he still lived in  the log cabin. The original portion of the barn is one of the oldest in the state of Michigan.  An addition was added to the north barn sometime after 1877. The original foundation of field stone set in soft mortar of sand and lime. 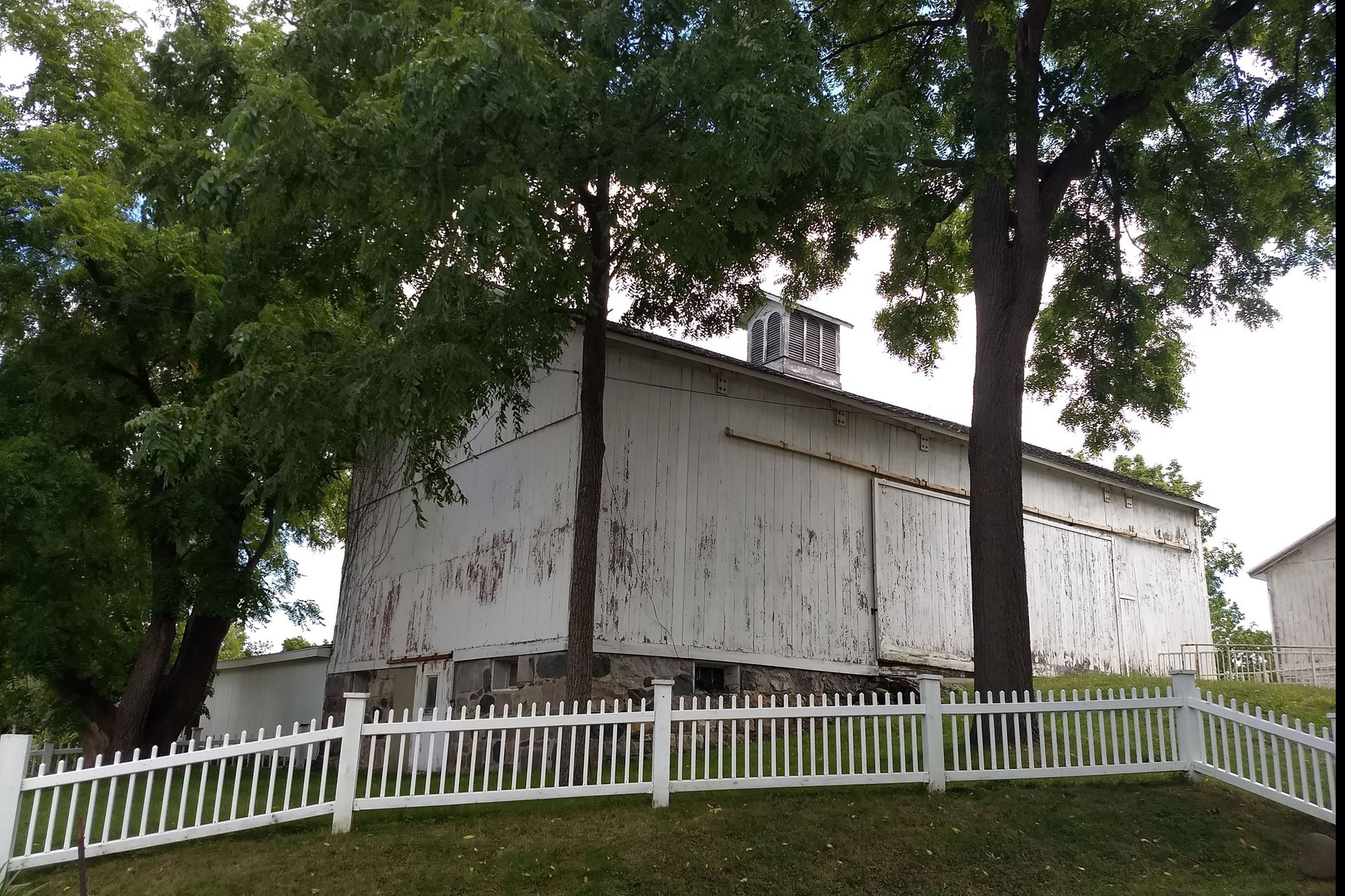 South Barn
This barn was used by the Hills for their 24 registered dairy cattle. Corn was stored in the two silos. The tractors and the farmer’s car were stored in the garage to the south of this barn. 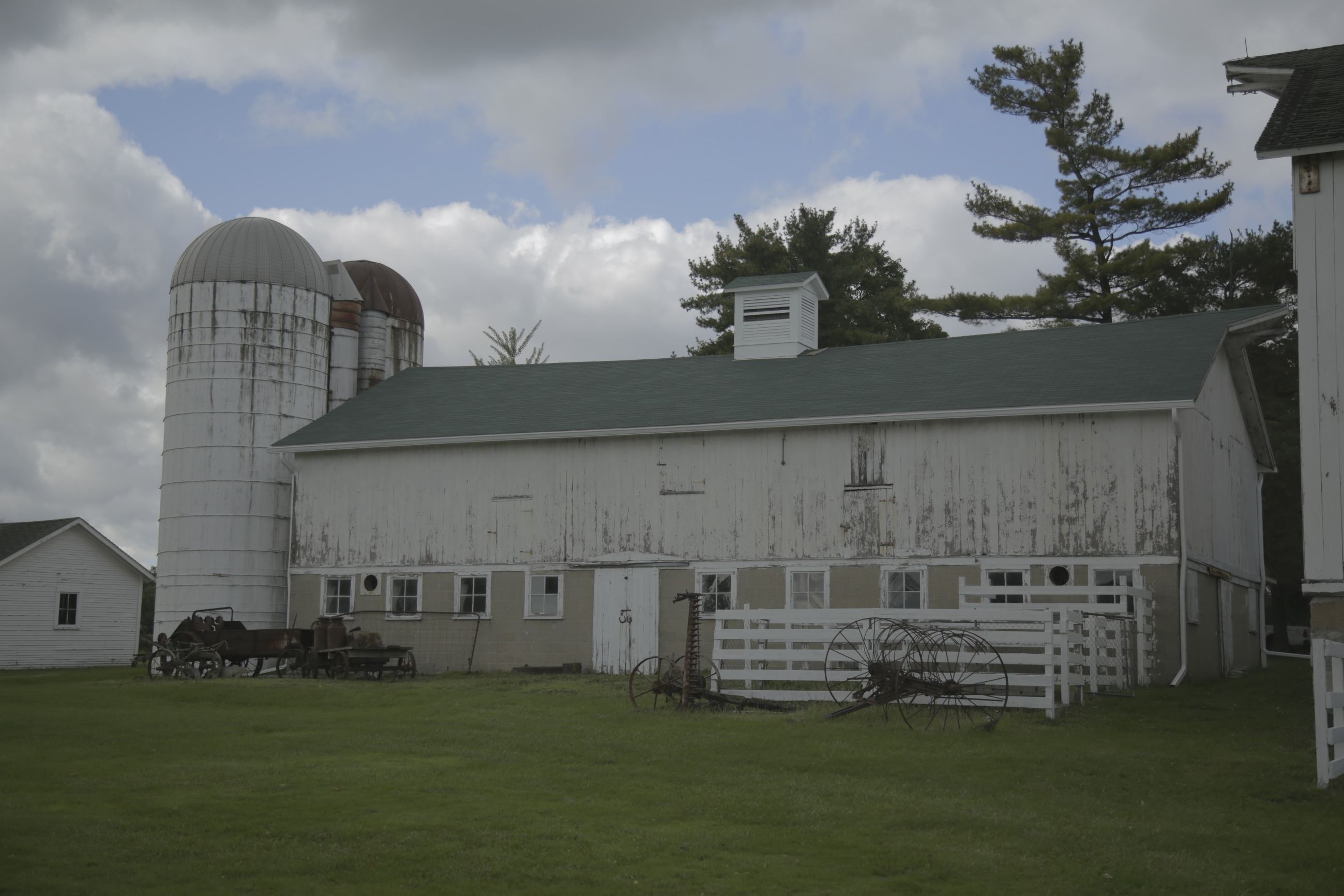 Caretaker's Cottage
The small cottage to the rear of the Simmons/ Hill House was built on the foundation of  the old carriage house, which was moved further to the south. Unfortunately, the South Carriage House had to be demolished in the early 1990's.

The cottage was built in 1941 and was the home for the Hill’s caretaker who also served as butler, and his wife, who was the cook. 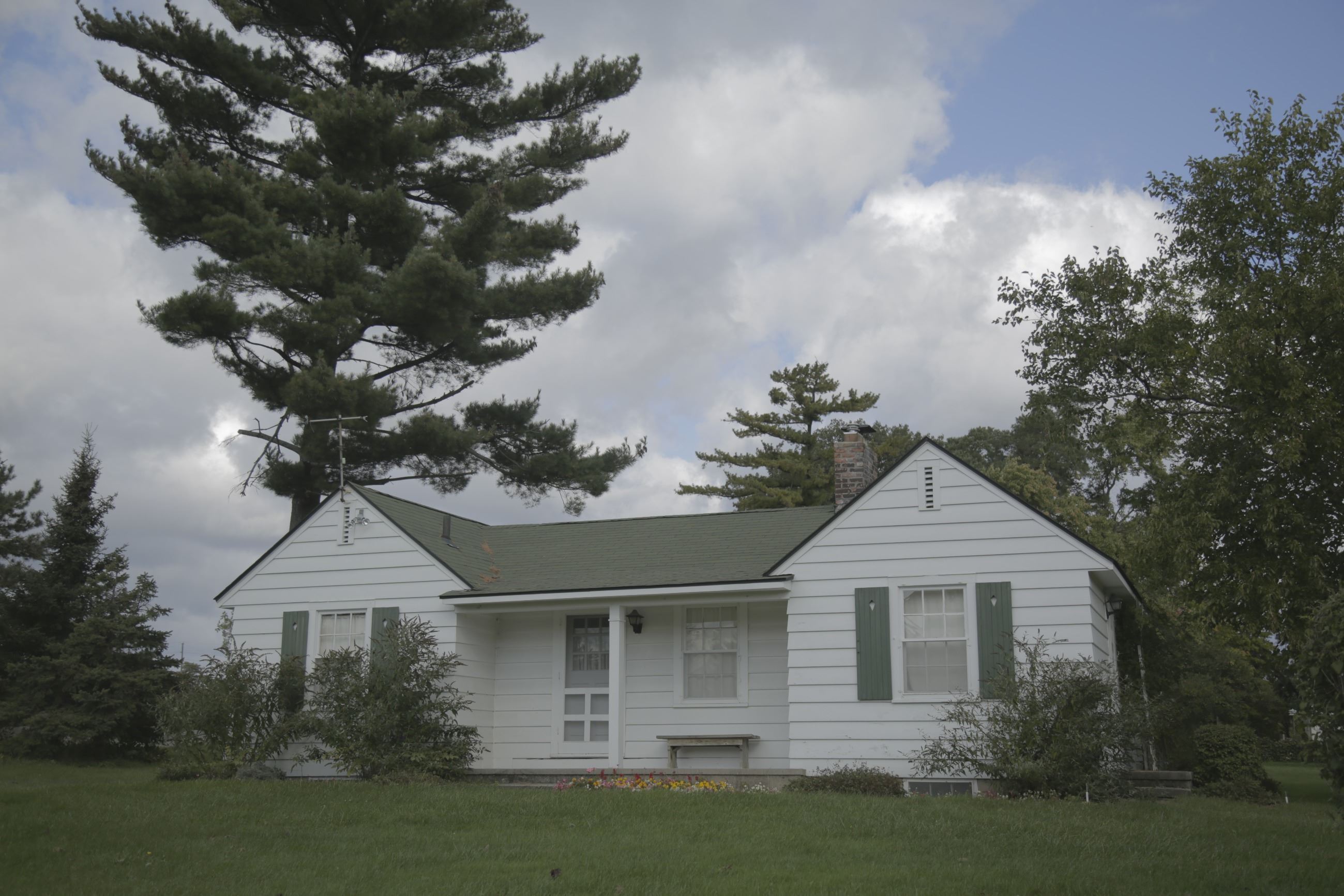 Next Previous
Government Websites by CivicPlus®
[]